Listen in to Legal Talk By Susan I. Shiber 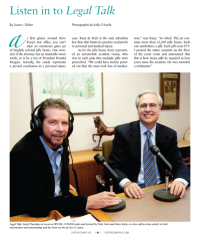 At first glance around Steve Karp’s law office, you can’t miss an enormous glass jar of brightly colored jelly beans. One wonders if the attorney has an insatiable sweet tooth, or is he a fan of President Ronald Reagan. Actually, the candy represents a pivotal conclusion in a personal injury case. Karp & Hart is the only suburban law firm that limits its practice exclusively to personal and medical injury.

As for the jelly beans, Karp represented an automobile accident victim, who was in such pain that multiple pills were prescribed. “We could have merely pointed out that the man took lots of medication,” says Karp. “So what? The jar contains more than 12,000 jelly beans. Each one symbolizes a pill. Each pill costs $79. I poured the entire contents on the floor of the court room and announced that this is how many pills he required in four years since the accident. He was awarded a settlement.”

“You have to be interesting to capture a jury’s attention,” adds Peter Hart. “We’re trial lawyers. If we can’t sell a story, we’re less likely to receive a verdict in favor of our client. Drama helps.”

Some of that drama is presented each week on Legal Talk, heard [on the 1st and 3rd Tuesday at 12:15pm] on WCHE 1520AM radio. The live call-in show, which is both informative and entertaining, has been on the air for [over 25 years]. As the nation’s longest running legal radio program, topics from car insurance to custody issues, movies to malpractice, novels to negligence, criminal cases to civil suits have been covered. Guests may be famous, infamous, or funny. Local judges, politicians, and educators join critically acclaimed authors, attorneys, and subjects of popular films on the roster. WCHE 1520AM is West Chester and Central Chester County’s only community radio station.

From a cast of thousands, here is a selection of some of the most intriguing guests. Jan Schlichtmann became famous in the 1980s when he alleged that chemicals from W.R. Grace and Beatrice Co. had contaminated drinking water in Woburn, Massachusetts, causing children to die. The movie A Civil Action starring John Travolta was based on the case. Karp interviewed Schlichtmann and author Jonathan Harr, whose book resulted in the film. “The attorney turned down two million dollars based on principle,” recalls Karp. “He admitted if he knew then what he knows now, he would have accepted the money.”

Karp had the opportunity to reverse roles with one of his former Villanova law professors. John Dobbyn came on Legal Talk to discuss his legal crime novel, Frame Up that tells stories about real folks get caught up in the system’s fuzzy moral contours. “I told him I was going to grade him on his performance,” he chuckles.

One of Hart’s favorite shows featured local judge the honorable William P. Mahon. “He presides over Chester County Drug Court, a program that stresses accountability and productivity for non-violent offenders coping with addiction,” explains Hart. “Judge Mahon stressed how much taxpayer money is saved by deferring charges and trials while individuals complete rehab.”

Both men were pleased to show the real story behind the highly publicized Liebeck v. McDonald’s Restaurants. “This was the most misunderstood case in many years,” suggests Hart. “Susan Saladoff produced a documentary called Hot Coffee and she shared what she learned with our audience.”

In short, Stella Liebeck, a 79-year-old woman from Albuquerque, was a passenger in her son’s car. She purchased a cup of coffee from McDonald’s drive-through and attempted to open it to add cream and sugar. She spilled the entire cup on her lap and suffered third degree burns on six percent of her body and lesser burns over 16 percent. She had skin grafts, lost 20 pounds and required two years of medical treatment. What came out in the trial is that the restaurant requires its franchisees to serve coffee at 180 to 190 degrees when it should never be more than 140 degrees. At such high temperatures, third degree burns can result in 12 to 15 seconds after coffee touches the body, even through cotton sweatpants, such as those worn by Liebeck. Documents shown in court revealed that more than 700 people reported burns from McDonald’s coffee.

The woman’s lawsuit was the butt of late night talk show hosts and people on the street berated her for audacity. Saladoff’s piece presented the truth. “That’s why we do the show,” points out Hart. “Law is mystifying and we attempt to de-mystify it. We keep it simple and try to make sense of what goes on behind the scenes.”

Gerry Spence, who gained attention for high profile cases, including the representation of Karen Silkwood’s family, is another colorful personality, one that Karp insists has an ego the size of Texas. Philadelphia-born Gloria Allred, nee Bloom, is equally notable for tales of her time on Court TV. Allred’s colleague Catherine Crier wrote The Case Against Lawyers and came on the radio to criticize current legal system dysfunction and litigation-crazed culture.

Every few years, the attorneys invite callers to talk about their favorite legal movie. “To Kill a Mockingbird usually wins,” notes Karp. “Topping the list, too, are 12 Angry Men, Inherit the Wind, and My Cousin Vinnie.”

Consistently popular themes address callers’ personal legal problems, such as traffic violations, wills and estates, and penalties for crimes. “We give a general overview and urge callers to contact an attorney,” explains Hart. “If they call off-air, we often help them find an appropriate firm. “We do not do the show to promote Karp & Hart. We do it to edify the public, clarify legal concerns, and disclose misconceptions.”

Tuning In – A Lawyer’s Career on the radio

Autumn is around the corner and traffic accidents will be on the rise.

When is it best to sue if you are wrongfully diagnosed?

Why hire a lawyer for a bicycle accident

Tips for avoiding an automobile accident

What Should A Client Expect From A Lawyer Who Handles Their Personal Injury Case?

What Happens If Someone Borrows Your Car & Gets In An Accident?

Join Stephen Karp On Legal Talk Every Other Tuesday At 12:15pm

How Much Is My Personal Injury Case Worth?

Worrying About Dying? See These Surprising Odds Of Dying Statistics

Questioning The Credibility Of Hospital Medical Records Used In Lawsuits

How Does A Pre-Existing Medical Condition Effect A New Accident Lawsuit?

Why Is The Cost Of A Medical Helicopter In Chester County So Excessive?

What Is A Slip And Fall Case?

What Is Medical Malpractice?

Can Insurance Companies Use Surveillance Videos In Legal Cases?

Why Do Teen Drivers Get In So Many Accidents?

When Is The Owner Liable For Harm In Slip And Falls Cases?

The McDonald’s Coffee Lawsuit & Chickens Too Hot To Handle

If The Neighbor’s Trees Fall On Your Property And No One Hears It – Who Has The Responsibility To Pay For The Tree Removal Costs?

Isn’t There A Better Way To Stop Drunk Driving?

Why Do I Spend So Much Time On Trial Preparation When Over 90% Of All Lawsuits Settle Before A Trial?

School Bus Accident – How Is This For An Unfair Ruling?

The Correct Way To Save Money When Buying Car Insurance

Is The Philadelphia Court System A “Judicial Hell Hole”?

Who Pays For Damage To My Car In A Car Accident?

Surgery In July Could Be Risky

If I Am In A Car Accident In Chester County, Who Pays My Medical Bills?

A Dram Shop Case – What Was This Guy Thinking?

The Real Effects Of Tort Reform: The Story Of Frank Cornelius

After Accident, “I’ve Never Felt Better In My Life”